Florian Coulmas, The Writing Systems of the World 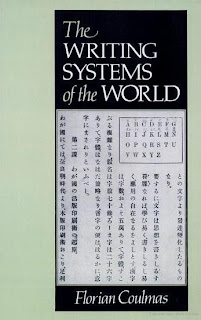 This book is an account of the writing systems of the world from earliest times to the present. Its aim is to explore the complex ways in which writing systems relate to the language they depict. Writing, Coulmas contends, is not only the guide or garment of spoken language, but has a deep and lasting effect on the development of language itself.

His study takes in Egyptian hieroglyphics and the cuneiform system of the ancient Near East; he describes Chinese writing, discussing why an apparently cumbersome system has been used continuously for more than 3,000 years; he ranges across the writing systems of western Asia and the Middle East, the Indian families and the various alphabetic traditions which had its origins in the multifarious world of Semitic writing and came to full bloom in pre-Classical Greece.


Read also some extracts on Amazon :

The Blackwell encyclopedia of writing systems

Writing systems of the world

The story of writing

The mysteries of the alphabet

Page 6 - However specious in theory the project might be of giving education to the labouring classes of the poor, it would in effect be found to be prejudicial to their morals and happiness; it would teach them to despise their lot in life, instead of making them good servants in agriculture, and other laborious employments to which their rank in society had destined them...‎

Cité dans 187 livres de 1812 à 2007
Page 6 - The invention of writing and of a convenient system of records on paper has had a greater influence in uplifting the human race than any other intellectual achievement in the career of man.‎

Page 6 - ... subordination it would render them factious and refractory, as was evident in the manufacturing counties ; it would enable them to read seditious pamphlets, vicious books, and publications against Christianity...‎

Cité dans 21 livres de 1946 à 2006
Page 122 - One hesitates for an epithet to describe a system of writing which is so complex that it needs the aid of another system to explain it. There is no doubt that it provides for some a fascinating field of study, but as a practical instrument it is surely without inferiors‎

Cité dans 22 livres de 1874 à 2004
Page 120 - It was good for any practical use And even the sound of the wind, the chirping of birds And the barking of dogs could be exactly described by it.‎

Cité dans 6 livres de 1957 à 2003
Page 62 - Apparently, words are the linguistic units that are first symbolized in writing. Systems of writing which use a symbol for each word of the spoken utterance, are known by the misleading name of ideographic writing. The important thing about writing is precisely this, that the characters represent not features of the practical world ("ideas"), but features of the writers' language; a better name, accordingly, would be word-writing or logographic writing.‎